He has had over 75 one person shows and his work has received international recognition with exhibits at the Studio Museum in New York and US Embassies in Rome, Dakar and Bern Switzerland among other venues. He has been widely published in textbooks and featured in several TV documentaries. Myths and Metaphors, a retrospective of his work was organized by the Georgia Museum in 2004. His award winning book, Messages from Home: The Art of Leo Twiggs was published in 2011.

In 2017, he completed a series of nine paintings titled Requiem for Mother Emanuel commemorating the nine victims that were killed at the Church in Charleston. The paintings were exhibited widely and featured on ESPN, CBS Evening News and reviewed in Art in America. He became the first artist from South Carolina to receive the prestigious 1858 Society Prize for Contemporary Southern Art in 2018. Twiggs has received two Verner Art Awards and the Order of the Palmetto, the state’s highest  civilian honor. In 2020, he was inducted into the South Carolina Hall of Fame.

My experiments with batik is not just a way of painting it is my artistic voice, an instrument that has become a part of my thought processes. The medium is as much a part of my message as the message itself.

Most of my works have deep roots in my experiences growing up in the South but my intent, as always, is to explore the human condition. It is this exploration, I believe, that makes art endearing and enduring.

“My work is based on my experience growing up in the South and I’ve never gotten very far away from that, in a sense. I was immersed in the culture, not separate from it so going back to visit by hometown is a kind of renewal. So, when I come to the studio my world is being renewed. When I talk to my brothers, when we reminisce about things that happened…when I come back to the studio, they come back to me vividly. But as an artist I don’t deal with them literary, you deal with them metaphorically.”

“I realize the experience I had as a child growing up was not necessarily unique to me, that there are always poor people. I think it was (David) Thoreau who said, ‘the mass of men lead lives of quiet desperation.’ And I suspect that when I’m doing my work and looking at my world, that even though I look at the specifics of my world, the generalization that people see in it can touch them as well.” Excerpts from an interview with Vivian Glover, 2006.

White Cow Blues  - “If I’m constructing a picture, I’m thinking about it. If I’m putting something in it, what meaning does it have? I believe that good art has one very important ingredient and that is economy. When I put something in my work sometimes it comes and I’m putting it there and I don’t really know the reason immediately, but as I work the reason begins to unfold. I get images, icons, like the cow, like cotton, high cotton…riding down 301, one of the highways, and seeing one of those big cotton field and it jogged my memory right to the time we had to pick it. The high cotton means more than cotton. The cotton field becomes a stage. So, I could put a cow. So, I could put a man walking. So, I could put a house across the field that might have been my house. So, the whiteness of the cotton becomes a stage where I put these different actors.”

Conversations - “I was always fascinated by targets because I think that a target means…if you become a target it means that something is pointing at you. So, I was interested in targets if you put a target on a person it doesn’t mean he’s going to be shot, it means that he’s under surveillance that he could be shot...I realize that many African Americans, especially the ones that move up in the world, that they become targets…some of them get shot down, you know and many of them are moving targets. They are moving targets. They don’t realize it that they are moving targets.” Excerpts from an interview with Vivian Glover, 2006.

Dreamers - (James) “Baldwin said the purpose of art is to lay bare the questions which are hidden by the answers and it’s my real philosophy that I kind of live by – to explore the questions which are hidden by the answers…So, I explore. So, if you look at the works you see things like the targets, like the confederate flag that I explored 25 years ago that I revisit and I’m revisiting again. You simply grow. I say you let it go where the spirit leads and that’s what I try to do with my works. Wherever the spirit leads you.” Excerpts from an interview with Vivian Glover, 2006.

Hooded - …I realize that many of our children, even when they’re young and innocent, they are going to be targets. When they don’t get the right education, they are targeted for failure. When they don’t get the right nourishment, they are targeted for failure…And so I say when I do these images, I’m going to put targets on.” Excerpts from an interview with Vivian Glover, 2006.

Nevermore - “You know that many people like stereotype pictures of African Americans. They like nice little pictures that they can hang on their walls. They have ideas about what African Americans should look like and when you start jumping out of that mold, your work in not going to sell…But you have to be true to yourself. You have to paint out of your experience and your experiences are not like their experiences…You’ve got to have your heart in it. And the way you have your heart in it is you can’t worry about that fact that I might do something that somebody might not like…I can’t worry about that. I think that you’re always growing and when you stop growing, you die and when you stop exploring, you die.” Excerpts from an interview with Vivian Glover, 2006.

Requiem for Mother Emanuel #8 – Twiggs, in the months following the nine racially-motivated murders in 2015 at Emanuel African American Episcopal Church in Charleston, SC., began his Requiem for Mother Emanuel series. Nine works, one for each of the victims. Those works are credited as “creating art to process the pain and feelings of hope as he witnessed a unifying response.” Sara Arnold, Curator of Collections, Gibbes Museum of Art, Charleston, SC.

Requiem for Mother Emanuel #9 – Sara Arnold further commented, “Painting by painting, Twiggs’ series captures the progress of emotion from terror and pain to grace and unity that surrounded this tragic event.” 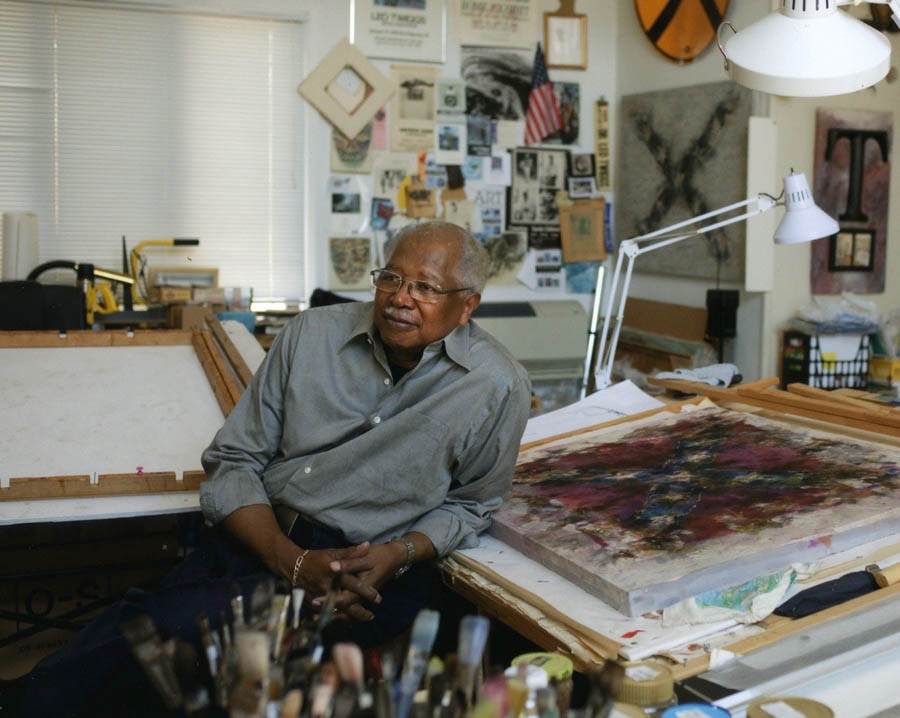 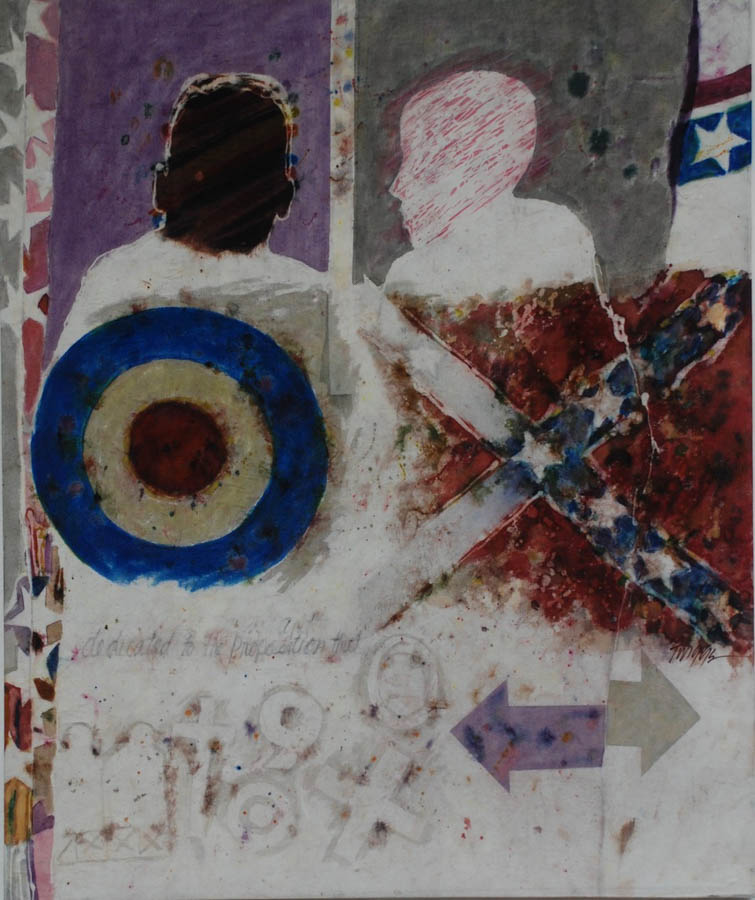 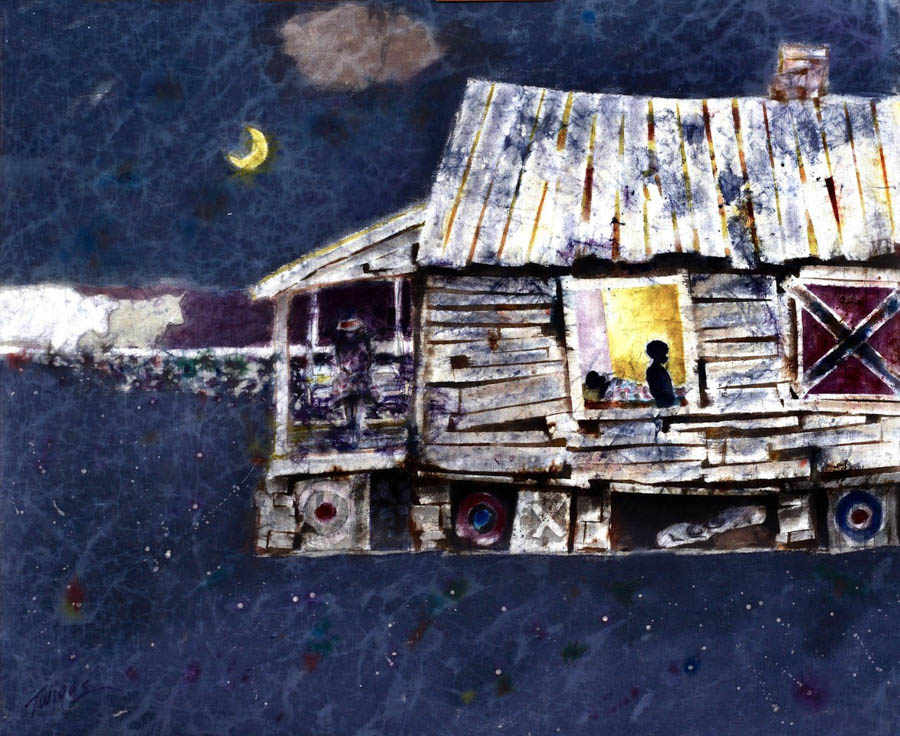 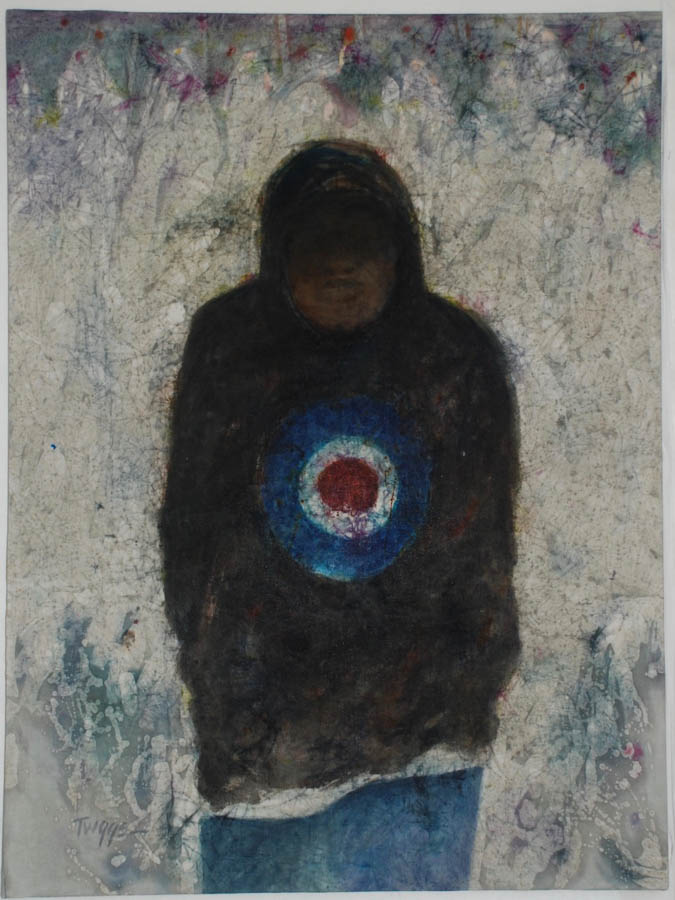 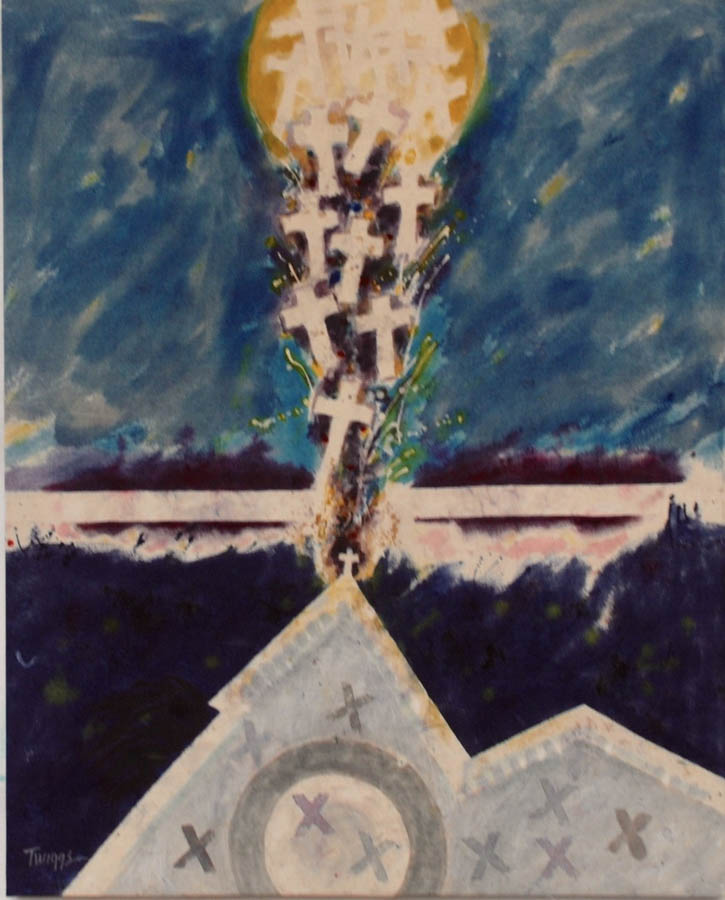 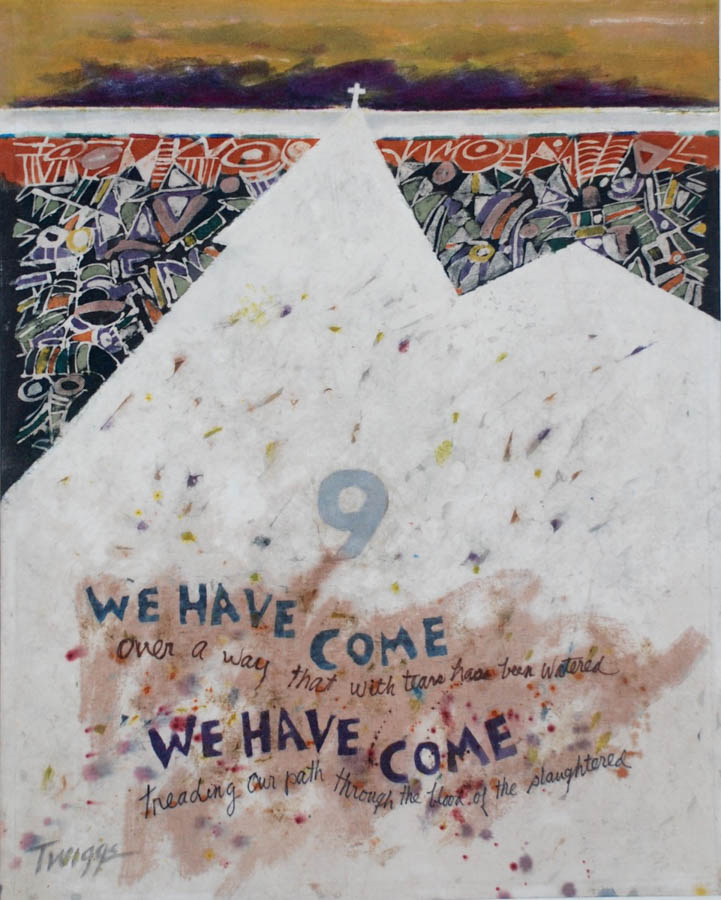 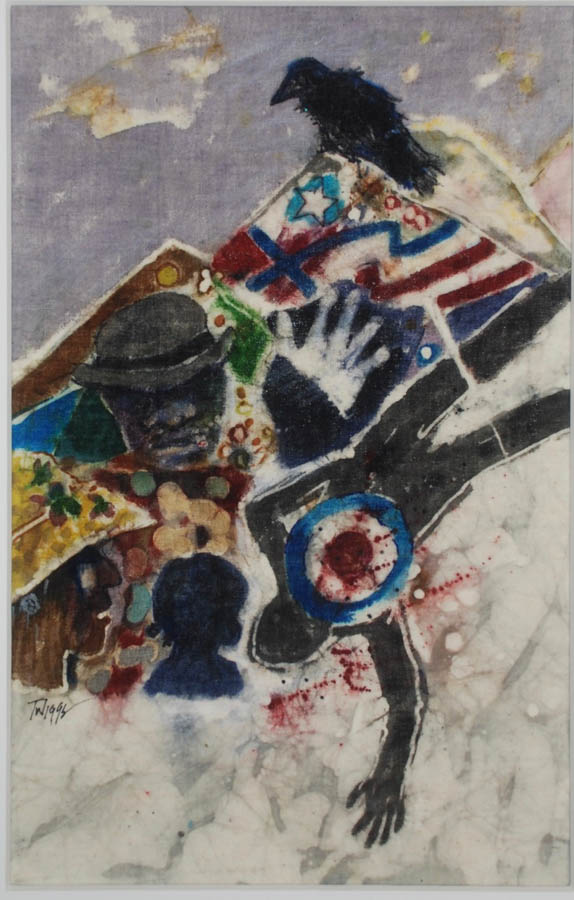 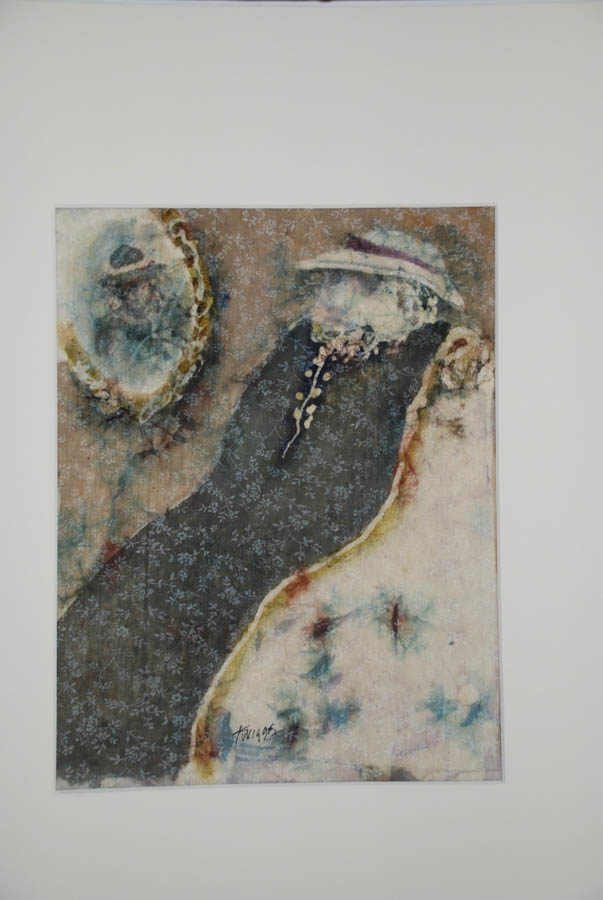 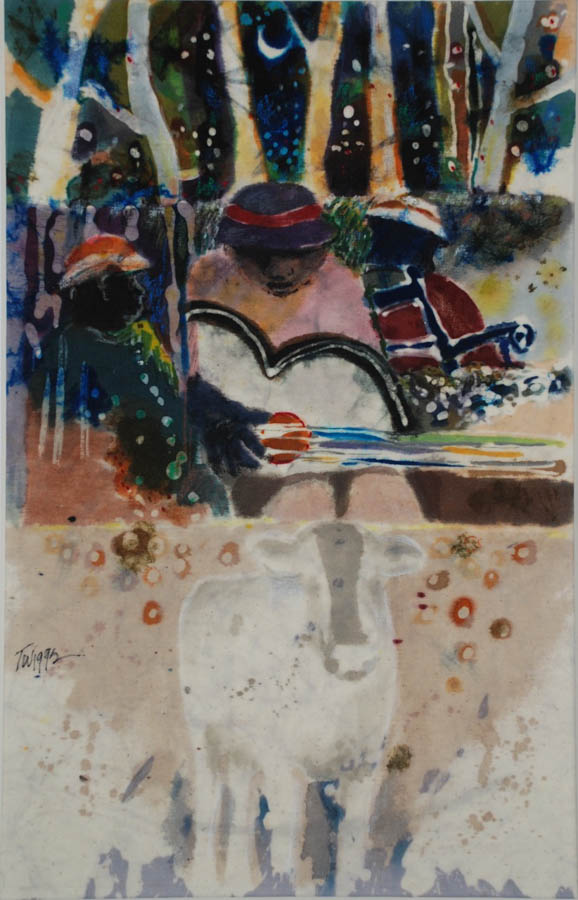